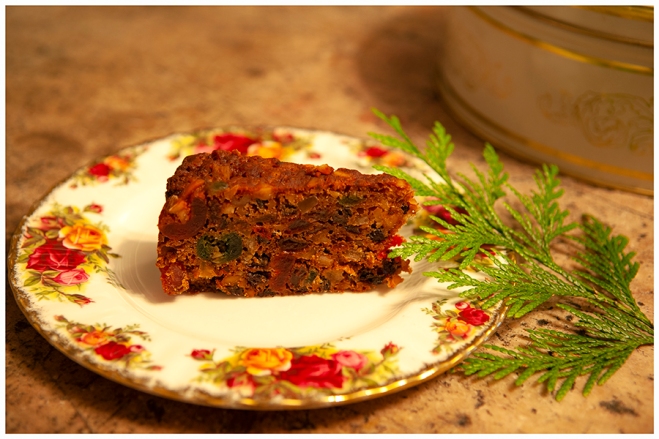 There is nothing like a good Christmas Cake, full of nutrition and a TINY bit of booze. It has everything in it to sustain a person doing hard labour or recreating in the mountains, skiing and hiking. It has the power to keep the cold away and get you back on your feet to finish the trek to the top of the ridge or through the deep snow on the way back home. It has even been used to aid in dragging deer through the bush. Thus is the power of the Christmas Cake.

Some people call it fruit cake, but I prefer Christmas Cake because my mother would make them in November and we couldn’t try them until Christmas, plus they always seem like a gift.

My Mother took pride in her wonderful Christmas Cakes. They were always baked in round pans with choice ingredients and wrapped in cheesecloth and a tea towel. The cloth was pulled back and the cakes were regularily soaked with booze. Brandy was used mostly, but I can remember whiskey, sherry and Grand Marnier were also used. I remember my mother saying it was important to get them properly soaked.

About five years ago, it could be ten the way they are flying by, my sister Deb started making Christmas Cakes from my mother’s old recipe that was written down with some of her other recipes and notes. They were every bit as good as my Mother’s, even better because I didn’t have my father rationing it out to me like it was the last water on a life raft stranded in the middle of the Pacific. 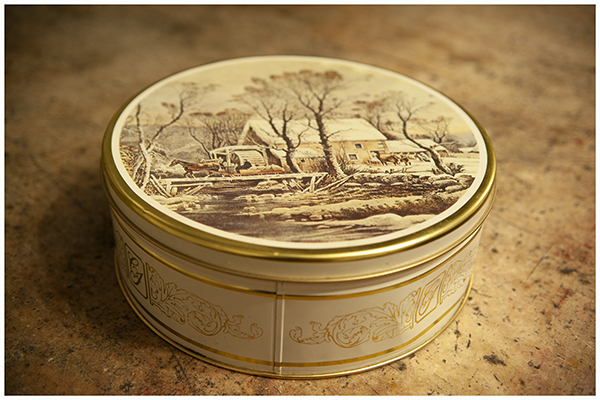 A gift in a dented tin!

This year my other sister Wynanne decided to make the Christmas Cakes. Now Wynanne is an absolutely awesome cook! Her meals are legendary among the family. Her children Christian and Meagan and husband Tim have been treated to many wonderful meals. Whenever I make something I haven’t made before I always phone her and ask advice.

But could she make a Christmas Cake that could stand up to my Mother’s and Deb’s?

It’s a lot of pressure. It should come easy to someone with as fine a culinary skills as Wynanne’s, but with Christmas Cake who knows! Never mind such legendary cakes!

First she had to deal with the recipe itself. Stained and worn, and I am sure, not very detailed. Luckily, Wynanne had the presence of mind to phone Deb and say that she though SEVEN cups of butter was too much.

Deb righted what could have been a disaster and told Wynanne it was seven ounces, not seven cups. They had a good laugh over the stained recipe and what could have been some pretty greasy Christmas Cakes. It seems fitting my sister’s laughing over my mother’s recipe, as my mother could always laugh up a storm. I imagined her laughing along with them.

As promised I received my cake just after Christmas. On opening the heavy tin the smell of boozy cake enveloped my senses. It was everything I remembered as good and fine. I unwrapped it carefully., first the tea towel and then the cheese cloth. It was the perfect colour, dark, nothing like some of the store bought ones.

Then the moment of truth, the first bite. It was excellent. Every bit as good as I can remember. Thick cake holding the nuts and candied fruit together, all inebriated in a good soaking of booze.

I sprinkled on another layer of booze before rewrapping and putting it away. Christmas Cake must be continuously hydrated if it is going to last the year (this one won’t).

Now I have to start rationing myself. The pieces start off big and get smaller as the cake gets smaller. By the end I’m like my father on the life raft. It, at least, has to last to the end of March and the end of the cold weather.

Wynanne lived up to her Mum and sister Deb. Not that there was ever a doubt.

What a wonderful gift. I’ll enjoy it in the bush and while working. Sometimes you get lucky.