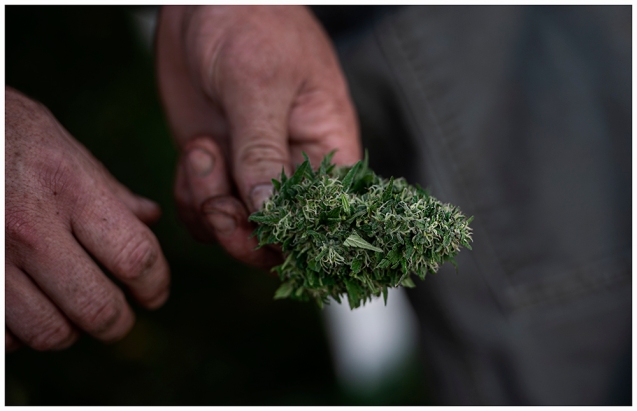 The good neighbour and I were given a few plants this year. I’d requested them and thanks to a couple sisters three plants were given to me in early spring. Much earlier than I usually start plants.  I passed on two to my neighbour as he is much better with young plants than me. The last one I was able to keep alive until it was ready to be transplanted outdoors in May.

They were seeds from Aaron Bradshaw’s plants that he gave his sister, Linda the year before.

Linda started them on her windowsill. Aaron had left the parent plants for his sister when he died of cancer.

The plants were young at the time he passed, but grew in his sister’s backyard. It’s possible Aaron used cannabis for pain or comfort during his battle with his sickness. More than likely, it was something everyone here grows up with and knows helps with many everyday events, happy, sad, life affirming or life threatening.

Aaron was a year or two older than me. We ran into each other plenty. His father and my Grandfather were good friends. The first time I met him, I remember clearly, we were both just tots. My father took me to visit his father. Aaron was running around their house wild. Of course he was showing off for me and probably wanted me to play. But his speed intimidated me and I stuck by my father’s leg.

After that, even later, he knew he had my number, I knew it too. Growing up in this area you had to be tough. Aaron always knew I looked at him meekly. Once, long ago, he stopped me on my bike and asked me to borrow it. This is how a bike was stolen in those days. It happened a lot to me before I hit ten. He said, he just had to do something then he would give it right back.

I gave my bike to Aaron, figuring where he might dump it twisted and broken. Instead he brought it back just like he said he would.

Later in years, when ever we ran into each other, usually in the bar, we would talk, share some stories, about fishing and hunting. We always mentioned his Father and my Grandfather’s friendship. Like there was a bond. And there was a bond. We both grew up in this place. A place that seems to be cruel to some of the people who have been here the longest and love it the most.

Our families have had their share of feeling it.

The plant in my garden put out some big early buds that have been enjoyed by many. I am unsure what strain it is, but it’s a deep powerful one.

My good neighbour’s plants turned out to be a male and female. After I told him about Aaron and the origin of the plants. He decided to breed the two plants  and we now have seeds for many years to come.

The good neighbour calls the strain Bradshaw Shank Redemption. I think Aaron would have got a helluva kick out of that.