This photo from the night of the Perseids shows Taurus, Pleiades and Perseus. It also has a few stars belonging to the bow of Orion. The summer stars are surrendering the sky to the winter cosmos.

The two faint ‘scratches’ in the sky are satellites. It is difficult to get photos of the night sky without satellites showing up somewhere in the frame. Very different from when I was a kid and I would search for them among the stars, squinting to detect movement. I have read, in the future the majority of ‘stars’ in the night sky will be in motion, making them not stars at all, but satellites.

The larger streak is a meteor. Although difficult to detect in this small version of the photo, green can be seen in the streak at the beginning and end. This colour is often detected as the small grain of metal, dust from a long ago comet enters our atmosphere and burns up. I always feel lucky to see this natural phenomenon.

We headed out last night before the peak of the Geminid Meteor Shower to get the jump on the shooting stars. It was overcast so we pointed the camera towards any opening. Lisa saw several meteors. I saw one spectacular one, unfortunately our cameras were pointed elsewhere. That’s the way it goes.

We are planning to go back out tonight. The weather looks about the same. It’s only about -15°c but feels colder, not because of wind chill but because I’m getting old. I don’t think it phases Lisa though. I just try to keep up.

With luck we will spot some. Even if we don’t I’m damn lucky. 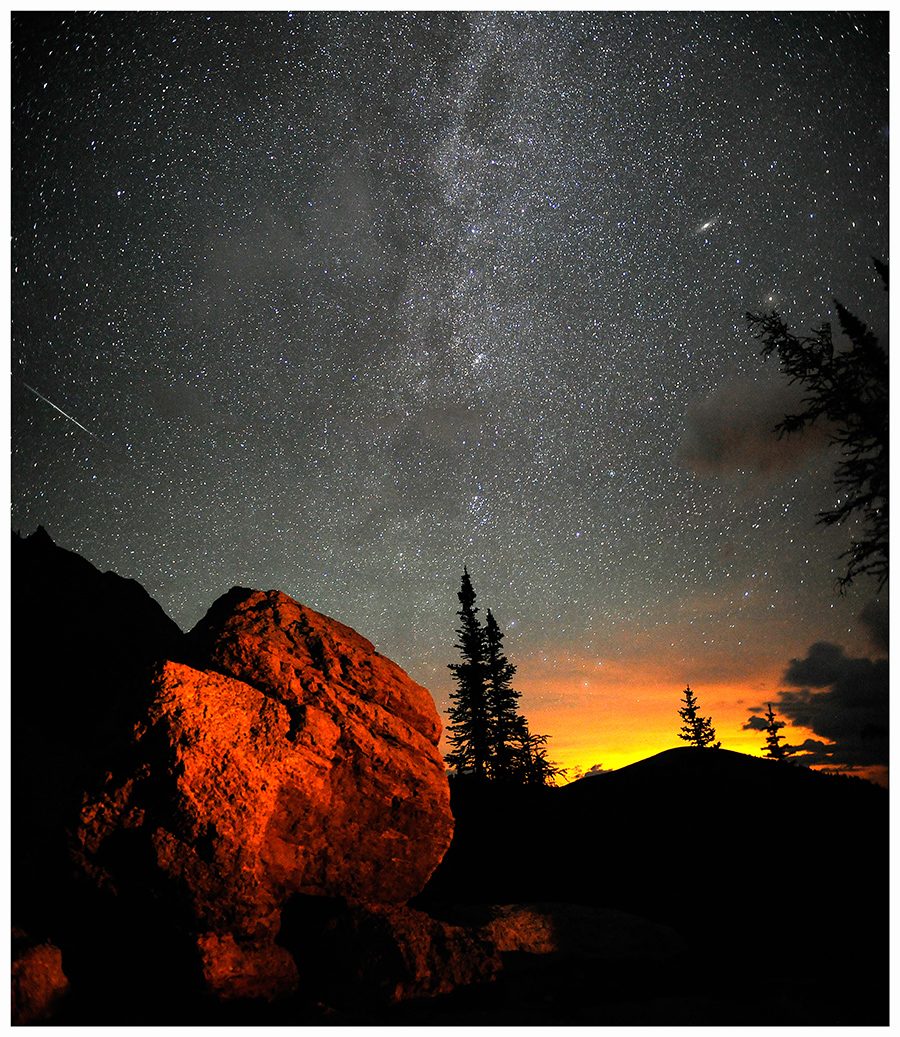 A meteor (left) streaks toward Perseus at tree line. The light of Andromeda Galaxy
(right, above and left of the tree branch) reaches us 2.3 million light years after
it was shone. Lightening lights the clouds on the eastern horizon.
A large rock, lit by our campfire, is covered in fossils of sea
creatures older than the light of Andromeda.
To see it is a miracle.

The annual Perseid Meteor Shower is now underway. If you have dark clear skies you may be able to see a few.

The peak is around the 12th and could be very good as the moon is young, leaving the night sky dark.

Come peak, Lisa and I will spend the night in the mountains chasing the streaks. It is difficult to predict the conditions. Even if clear smoke could obscure the sky. Tonight, Venus could barely be seen in the western horizon. Mars can’t be seen yet. Once it gets higher above the eastern horizon it will become visible.

Meteors occupy the entire sky. I often point my camera towards horizons, this year may be better preserved shooting directly overhead where the smoke is not so noticeable.

If that is the case It may be better in an enclosed space like a canyon. You see less of the sky, but what is seen is directly overhead.