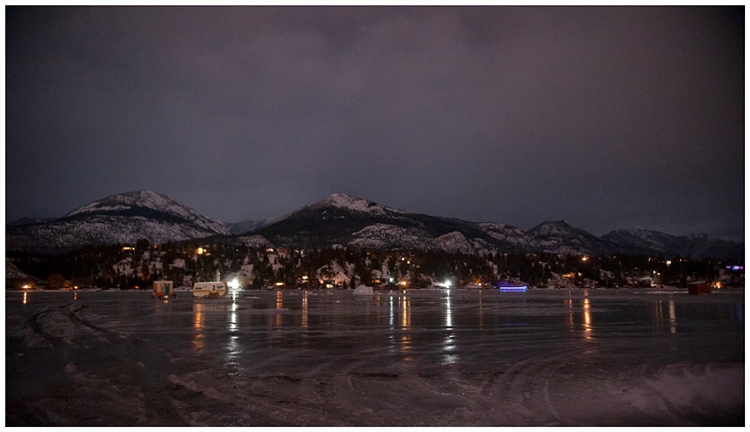 A chinook rolled in taking most of the snow in the valley bottom.

Willow and I headed into the mountains tonight. We were looking for stars, but knew it would be a tough find. Sure enough it was cloud cover. Sometimes the clouds can be scaled via a mountain pass leading to clear skies. It was worth a try. The roads were ice but decent.

Back in the bottoms we took to the lake, frozen with at least 14″ of ice, glare from melt. Pure hell to walk on, especially in the dark. This is were I grew up. Only yards from shore, across the tracks.

It’s a different place now. The lake is an attraction. A commodity to be bought and sold.

But, here tonight, it doesn’t look much different than I can remember. More ice shacks, less fish, more lights on the east side filling the sky with pollution.

The tracks are there. My world would revolve around those trains. Watching them roll by, the sound, tracks creaking, listening for oiled ties loose on a stoney bed, coal dropping by the cart load, happy to be burned, eventually getting between me and the lake.

Things change, not quickly, but minutely, it’s hard to detect. Until one day you’re scratching your grey beard, in the same place as when you were young, finally figuring the joke’s on me.

9 thoughts on “looking back”